Delegates arrived at the 2022 Unifor Constitutional Convention on Sunday, August 7th and registered for the event. On Monday the event opened and delegates were welcomed to the Metro Convention Center by the campaigning parties supporters. Democracy at work. For the first time since its inception, Unifor was undergoing an election. 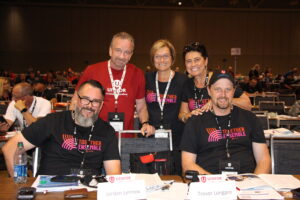 Throughout the first day delegates had the funds of the National Union reported on by the Financial Secretary, Lana Payne. A comprehensive thirty five page report outlined the National Union’s funds in multiple areas. This included the Organizing Fund, General Fund, and the Strike Defense Fund.

There was also a report given on Jerry Dias’ constitutional breach, which raised some debate at the microphones. However, the breach was confirmed and reported on thoroughly – including the use of a third party investigator and acknowledgement that the Union needed to be as transparent as possible. The National has announced, in the wake of this breach, to create a position of Accountability Officer. While it is unclear the exact scope of duties this position will be responsible for, it is clear that they will be monitoring the financial expenditures of officials within Unifor.

Due to lengthy debates and discussion, there were only a few resolutions passed on the first day. Included amongst those was a Resolution to include an Indigenous member on the National Executive Board, which passed when put to a vote.

On Tuesday, the delegates heard reports from the Regional Directors of the Western, Atlantic, Quebec and Ontario regions. Each Region has faced its own challenges and each had its own success stories. One theme that remained true through all the Regions – healthcare workers are bearing the brunt of the COVID pandemic.

Following lunch, the Nomination of Officers and Presentation of Regional Director Nominations commenced. The following candidates were enthusiastically nominated for National President by their supporters – Dave Cassidy, Scott Doherty and Lana Payne. For the position of Financial Secretary, both Katha Fortier and Len Poirier were nominated.

For the positions of Regional Director:

Also on Tuesday, delegates were honoured to receive Derrick Palmer, organizer of the Amazon Labour Union. Derrick presented an impassioned story about the fight against Amazon, the dirty tactics used to attack the ALU movement and the creative responses he and other organizers had. An amazing speech delivered by an equally amazing activist.

Wednesday began with the Organizing Report presented by Kellie Scanlan, Organizing Director. She highlighted gains in membership and discussed the use of new technology that sprung primarily from the need presented by the pandemic. Following that was the presentation of the Nelson Mandela Award to Alejandra Morales Reynoso. This Mexican auto worker led the fight to replace the plastic union representing Mexican workers at the General Motors Silao Plant, in Mexico. She delivered a passionate speech about the importance of a democratic union and the need to fight corporate greed.

The election of Officers and Regional Directors took place following lunch. The room was energized and Peggy Nash, former NDP MP, chaired the election. The first vote was for the position of National President. It was indecisive, with no candidate receiving fifty percent plus one. However, it did eliminate Dave Cassidy from running. That left Scott Doherty and Lana Payne. Upon the second vote, Lana Payne won decisively, securing the position of National President. 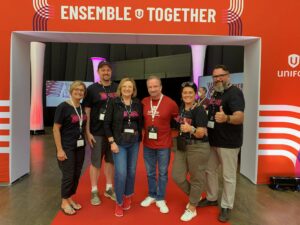 The Bud Jimmerfield Award, which is given for excellence in the pursuit of Health and Safety standards was presented on Wednesday as well. The recipient, Marc Roussel, saved countless lives through his work against asbestos in his workplace. Delegates also voted on multiple Resolutions and Constitutional Amendments, including Effective Anti-Scab Legislation and Strike Support, timelines for submissions to Resolutions and Constitutional Committees prior to Convention.

Thursday involved a presentation of the new Unifor Auto Policy, titled Navigating the Road Ahead: Rebuilding Canada’s Powerhouse Auto Sector. This is an important document that will be presented to both Companies and the Government, as well as help guide and shape the future of the auto industry in Canada. This document was even shaped by leadership at Local 199, ensuring a highlight on the needs for St. Catharines Propulsion Plant. This was followed by a launch of www.uniforautohub.ca, where the report can be found, and the newly elected Lana Payne holding a press conference to discuss the direction the Union would be taking.

Immediately following lunch on Thursday, delegates rallied outside in support of Local 177 – whose members have been locked out for fifteen months and counting. This was an electrifying event that wound the streets of downtown Toronto. Inside the Convention hall, Local 177 Executive members shared the story of their membership and the delegate’s answers, pledging a total of roughly $150,000 to help the locked out members of Local 177. Len Poirier, when told the rough total that Local’s had donated, responded “Let’s just call it $200,000!”.

Local 199 President at the Mic

Friday, the Unifor Public Review board, a separate financial accountability arm of Unifor, presented their report. This report included the Independent Auditor’s report, the Statement of Financial position and broader Financial Statements. Following that report, delegates voted on multiple other Resolutions and Constitutional Amendments, one of which included financial restructuring of the Organizing Fund.

The Convention concluded with a speech by Lana Payne, National President, in which she called for unity and solidarity. The message was clear: “We have truly come together this week to move our union forward,” said Payne, the first woman to be National President. “You have shown that it is the union – all of us together – can take on the challenges we face as workers.” 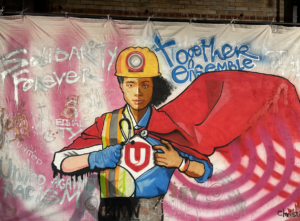 On behalf of Local 199 Delegates: