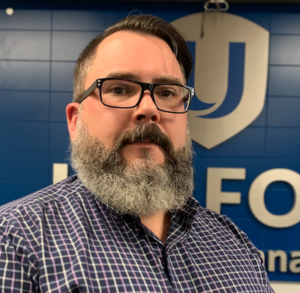 From the Hall – May, June and July

The past few months at the hall have been particularly busy at the hall. There have been multiple sets of negotiations, the ongoing investigation into the former National President, a meeting with the Federal Labour Minister, and preparations for the Labour Day Celebration.

News From the Units

During the last two months contracts have been ratified with multiple employers. Assemble Rite ratified at 100%, seeing wage and benefit increases and the addressing of health and safety concerns. Both John Bear and Niagara Motors ratified contracts at 71% and 73%, respectively. Both contracts saw wage and benefits increases, as well as added language protection for technological changes in the industry. Welland Chevrolet, formerly David Chevrolet, ratified their collective agreement at 100% – securing wage and benefit increases, and technological change language protection.

There are also several units within Local 199 that are currently hiring:

Membership has raised concerns regarding the investigation into the former Presidents conduct. The full National Executive Board minutes from meetings conducted from February until June, 2022 were released by the NEB. The Local 199 Executive Board voted to post these minutes and the investigative findings within on the Local’s website. The minutes can be found by following this link: https://unifor199.org/2022/07/22/unifor-national-executive-board-minutes/.

Recently, I was invited to attend a meeting with the Federal Minister of Labour, Seamus O’Regan, by the Seafarers International Union of Canada. During the meeting union representatives raised concerns around the labour shortage. We highlighted the importance of making skilled trades attractive to the next generation of worker – calling attention to the lack of skilled trades at multiple manufacturing facilities Local 199 represents. We also discussed the need for Federal involvement in the next set of Detroit Three bargaining, expressing the crucial need for investment and the difficulty competing with other jurisdictions. Finally, I thanked the Minister for his contributions in securing the Federal investment into Valbruna ASW., which has facilitated the installation of new equipment. 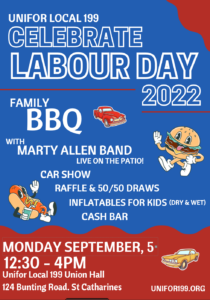 Lastly, the Local is excited to be bringing back its Labour Day Celebration! This year we have organized a car show, the Marty Allen Band, a BBQ, bouncy castles, raffles, a 50/50 draw, face painting and children’s activities. Not to mention a cheap cash bar! The Executive Board is thrilled to see you all at the Hall (124 Bunting St., St. Catharines) on Labour Day, September 5th. Remember, this is a family friendly event and we encourage members to bring everyone out. We are also still forming plans to participate in the MerrittonLabour Day Parade. Details will be posted when they are known. More information can be found at the following link: https://unifor199.org/2022/07/26/labour-day-celebration/.

On behalf of the Local 199 Executive Board:

Vesuvius and Welland Chevrolet are Hiring!These Local 199 Units are Hiring!

Vesuvius and Welland Chevrolet are Hiring!

These Local 199 Units are Hiring!