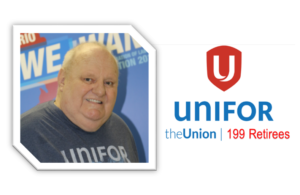 Good afternoon and welcome back! It has been a long 20 months since we had to shut down in March of last year. A lot of things have happened since then.

First and foremost, we saw new contracts negotiated with GM, Ford and Fiat Chrysler.  Nothing was achieved for the retirees except for a small group of retired workers 85 years of age and older. They got a token, one time payment of a whole $500. So, it was the same old story. After three meetings with Jerry Dias and the bargaining unit chairpersons, next to nothing was done to address the impact of the rising cost of living and we are falling farther and farther behind with inflation at a rate we have not seen since the 1970’s when we staged a one-day national strike against wage controls. I don’t care what they want to call it.  Money is money and addressing our needs in order to be able to live in dignity is something that must happen; not later, but in the immediate future. Our union must start to deliver for its retirees and not just give us lip service. Also, the workers still in the plant who can retire got no improvements in terms of what their pensions will be going forward

The next set of negotiations will be in 2024. It is not too early to start thinking about that now and making our voices loudly heard. The pension fund is at 115% so let’s go for the gusto and demand that we finally see overdue big gains for retired autoworkers.

There is some good news. There have been substantial changes to our benefits plan. Note that none of these have been negotiated by the Union. This was all done because no one used a lot of benefits in our plan while COVID shutdown the economy. In addition, the stock market made record profits. These things created a big surplus in the benefit plan. So, their administrators did a survey to see what we wanted in the way of improvements to our plan late last year. It took them over a year to put the results together. As a result, there are changes which are real improvements to what we get and like I said, these were not negotiated by the Union in any way. The plan made so much money that it can afford these improvements.

The plan itself was run by an actuary; a conservative actuary and as far as I’m concerned, we can give credit to Gordon Graham, there shouldn’t be any problem with future funding at these levels of benefits.  So, that’s what I want to make clear before I tell you what’s in it, ok?

I will start by the re-imbursement for being in a long-term care home. The coverage was only $800 per month. You know how I voiced my opinion about this for years saying that it was too low. It’s double now at $1,600 per month.  So, anyone that’s in a home as of January 1, 2022, will be getting an $800 per month increase towards the re-imbursement for staying in the home and anyone who enters one in the future will be $1,600 per month towards the cost of being there.  I’m pretty certain that it still has to be a government home but it’s a big improvement regardless.

Out of Country/Province Travel Coverage was for 30 days. As of January 2022, it will be for 35 days. The plan is adding travel days there and back.

These are just some of the changes. They do not start until January 1, 2022. Do not phone Green Shield or anyone else until January 1, 2022. There will be a full benefit booklet mailed out by next month. There will also be a video for January 19th retirees meeting. I will also post this on Facebook for Unifor 199 Retirees, and it will be on our Local 199 website. This will ensure everyone can see all the changes in the benefit plan for the ASR Trust Fund.

I’m happy with what the Retired Workers National Executive Board has done overall during this last period of time.  There are lots of dedicated people on it and it is great working with them as well as with the other Chapter Chairpersons.  I’m very fortunate to be able to communicate and work with this group.  I can tell you there is a lot of history there and there’s a lot of smart people.  I’ve enjoyed the discussions we had about the contract and everything else.  I’m proud of how they have dealt with things.  In short, it’s good to be part of that group.

I will close by telling you that Christmas is coming. Our meeting next month will be especially worth coming out to.