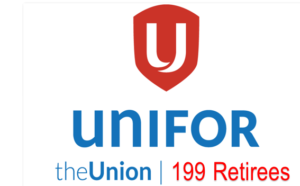 The end of year 2019 is here. It has been a good year at the Retirees Centre. Our “Recreation Committee” has carried out many functions through this year and continue to move along towards next year. They have held Trivia nights, parties for football games and many other functions. Our bar staff have done a great job this year as well, especially Laurette and John.

On December 6th and 7th, I attended the “Ontario Unifor Council Meeting.” There was a great talk given on Doug Ford’s healthcare policies and how Ford and his government are making cuts in every way you can think of. But people have been fighting back with strong rallies and many protests. The schoolteachers’ unions were all there at the council and their leaders talked about how bad things were going to get at bargaining table and the fight they are waging against the Ford government.

Jerry Dias talked about the closure of the GM Plant in Oshawa scheduled for December 18, 2019, which is today, being the last day of work. Dias said that the GM plant, when it was in operation for the last number of years, had more awards for quality and top levels of productivity than any other GM plant in the world. Starting in 2008, until the present time, the union had met most of GM’s demands to keep the plant open. Two-tier wages and efficient work practices and a lot of other company demands were met. Yet GM still closed the plant. Dias said that he was at the end of his rope. He said that you might as well bargain to get the most you can if the plant is closing. You can try to bargain to keep it open and do everything you can yet in the end it still closes. What do workers really gain?

I told Jerry Dias, following his speech, not to forget about the retirees in 2020. We still need inflation protection for our pensions in the Big Three contracts. I also said that with all the teachers and health care workers and other Unifor members being in a struggle, we need a national one day strike in Canada.

Wishing Everyone a Merry Christmas and Happy Holidays and All the best in the New Year.