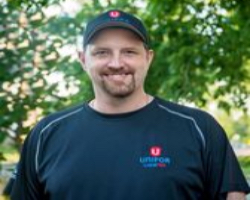 I wanted to take this opportunity to congratulate Tim McKinnon on his appointment to the National Union as Staff Representative beginning June 28th. Tim’s tireless service and dedication to the awesome membership of GM St.Catharine’s is unmatched and his appointment is well deserved. I had the opportunity to see first-hand Tim’s efforts, abilities, and relationships. His mentorship and introductions to the major players on both the Union’s side and the Company’s side have provided insight and a solid framework to continue building on as we move forward. From the everyday tasks in plant, to the effort he put forth at Bargaining, Tim demonstrated a strong dedication to this membership and he lead by example. His confidence in my ability to step into this role, combined with the support of the membership and Local Union President Jordan Lennox, are encouraging and I will strive to continue to serve this great membership.

I am a 45-year-old father, married for 23 years with 4 adult children (one of whom works in V8 assembly). I have been employed in the automotive industry for the last 25 years. In that time, I’ve worked in both Unionized and non-unionized shops. I’ve been with GM since January 2014 and was hired as a SWE. As a SWE I was elected by my peers to day shift alternate in 2016 for Zone 4. Zone 4 now includes GF6 transmission machining/assembly, V8 Crank, the service groups of Quality, Gage Repair, Precision, Met Lab, Chemical Control, Tool Delivery/Tool Techs, Core Team, Clerks & the new DCT Corvette Transmission. I have also volunteered on the Communications Committee and worked beside the Invest GM St. Catharine’s Committee.

I have had the privilege of being mentored by numerous Union reps over the last 5 years, drawing from their knowledge and experience to better understand how to best represent the membership of General Motors. I have also been fortunate to work with Tim closely for the last 5 years in-plant, but also in negotiations this past fall and in resolving many issues that arose daily; a level of involvement that has provided valuable experience.

I am committed to the success and future of our plant! Not just for our own future, but for the future of those who come behind us. Many of you have referred family members or friends to work here because it’s still one of the best employment opportunities in the Niagara Region. I am a 3rd generation GM employee, but GM has changed greatly since my grandfather worked here. And with the auto industry transitioning fast to an electric future, we must position ourselves to be a part of that change! Personally, I have another 20+ years before I can retire and therefore have a vested interest in seeing this plant succeed.

I look forward to the challenge and the opportunity to represent you as Chairperson for the remainder of this term and for the future!

No description at this time.