After having been in active negotiations in downtown Toronto with company officials at Ford, General Motors, and Fiat Chrysler, the Unifor Master Bargaining Committee have adjourned their meetings as of Friday, September 4. This is in anticipation of Unifor National President Jerry Dias’ selection of the strike target, scheduled for Tuesday, September 8 (for more details on the strike target and process, see below).

Once chosen, only Master Bargaining Committee members from the target company will return to Toronto to commence negotiations, working toward the deadline of 11:59pm on September 21.

As you will have seen, the union has clearly articulated its negotiating priorities to each of the companies, following a careful review of the contract proposals recommended by the members. We have expressed to the company that job security is critical and that we aim to discuss product and program allocations in each of our facilities over the course of negotiations. Additionally, we have made clear to the companies that there is no intent to negotiate a concessionary agreement. Rather, it is our objective to make monetary improvements for all Unifor members. This also includes proposed improvements to the 2012 New Hire Program.

What is the ‘New Hire Program’?

Negotiated in 2012, the New Hire Program (often referred to as the “Grow-in”) established a lengthier time frame for newly hired hourly workers to attain the equivalent rate of pay and other benefits as traditional members.

Unifor (then CAW) agreed to this program at a time when the North American auto industry was rebounding from the economic fallout of 2008-09. The program, which lowered the cost of hiring new workers, was critical to landing major investments in Canada. It also provided an alternative method to a permanent ‘two-tier’ arrangement, similar to that applied in U.S. facilities, whereby newly hired workers would never reach parity with traditional members.

In 2016 negotiations, the union successfully pushed to make improvements to the New Hire Program, specifically by enhancing pay rates in the 10-year wage grid (which is one component of the Program). This resulted in significant monetary improvements for members. However, the Program length remained unchanged and many important disparities between new hires and traditional members persisted, including differences in shift premium, SUB entitlements, cost-of-living adjustments, among others (see side bar, “Key elements of the 2012 New Hire Program”). Over the life of the next collective agreement, some Unifor members will exit, for the first time, the 2012 New Hire Program with various outstanding matters in need of negotiation and clarification during this round of talks. For example, one critical item is the negotiation of a timetable for phasing in the maximum $1 per hour post-retirement benefit contribution that is required of the employers.

Our union approaches the 2020 round of bargaining with a clear mandate from the members to carefully review, assess, and further improve on the New Hire Program. We have made this mandate clear to the companies.

What is next? Selecting the strike target – September 8

On September 8, Unifor National President Jerry Dias will hold a press conference in Toronto to announce the strike target for 2020 negotiations.

For decades, it has been the practice that the National President gets to decide which of the three companies the union will negotiate with first – setting the pattern for the others to follow.

There are multiple factors considered by the National President when making this strategic decision, all of them focused on building Canada’s auto industry and achieving the union’s bargaining objectives.

The strike target need not be a single company, but can be more than one company. In rare circumstances, the National President has opted to negotiate with all three companies simultaneously.

The press conference will take place at 11:00 a.m. ET, and live-streamed on Unifor’s Facebook page.

Click here to watch live at 11 am Tuesday September 8th

On August 31, Unifor reported the results of the strike authorization votes held across the Detroit 3 units.

The union will continue to report on progress of talks with members in the coming weeks, and will relay as much information on the status of talks as is possible. Our objective is to be as open and transparent with members as possible, without undermining the integrity of the bargaining process. 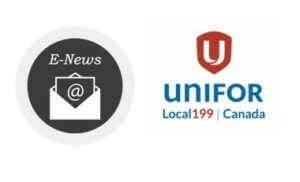 Unifor Local 199 Members who work at General Motors St Catharines and want to receive information and updates by e mail can use the following link to submit their e mail address. PLEASE NOTE If you have already sent in your e mail address you do not have to do it again. We will add your address to receive information about the ratification meeting and vote. Information will also be posted in the plant, on our Facebook page and Website.

Here are a few useful links related to bargaining.