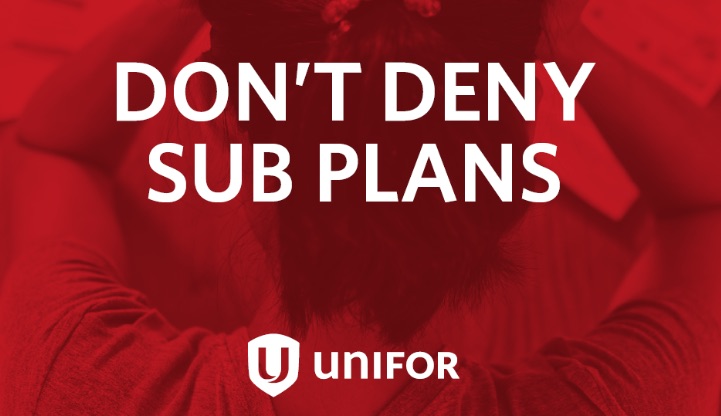 On May 9, the federal government issued its long-awaited guidance on how Supplemental Unemployment Benefit (SUB) Plans will interact with the new Canada Emergency Response Benefit (CERB). The guidance states: “the provisions that exist under the Employment Insurance (EI) system for employers to make additional payments to workers through SUB plans do not apply to employees who are receiving the CERB.” Full text of the guidance is available at Link to Service Canada

As we know, the CERB’s intent is to distribute emergency income payments to workers in Canada, as quickly as possible. This was, in part, a response to the failure of our Employment Insurance system’s ability to get the job done. So far, approximately 7.5 million affected workers are in receipt of CERB payments, which pay a $2,000 flat rate monthly benefit (equivalent to $500 per week).

By denying access to SUB payments under the CERB program, the federal government is needlessly preventing workers from accessing important employer-funded benefits. SUB payments, by design, provide added income support to workers on layoff. The failure to rectify this obvious gap in the CERB, after repeated calls to Federal Cabinet Ministers Carla Qualtrough and Bill Morneau over many weeks, is frustrating and shows a lack of compassion for working people.

What steps is Unifor taking to resolve the issue?

The National Union started raising questions with ministerial staff and federal officials about SUB plan interactions with the CERB shortly after the tabling of Bill C-13 (the COVID-19 Emergency Response Act) in March. Informal guidance provided at that time suggested federal officials understood the problem and would rectify it in the coming weeks. As time passed, our union made repeated attempts to secure written confirmation and clarity on this matter, with no response.

On April 15, the National Union wrote to Minister Qualtrough and proposed a regulatory fix to ensure eligibility of SUB payments under the CERB program. Shortly after that, the National Union (through the Canadian Automotive Partnership Council) delivered a similar demand to Navdeep Bains, Minister of Innovation, Science and Industry, alongside other emergency industry proposals. In the weeks to follow, Unifor launched an online petition, while Local Union leaders took action in their communities by engaging with the local media and various Members of Parliament (including a large press event in Windsor involving local MP Brian Masse). Our National President Jerry Dias also co-signed a letter with federal NDP MP Daniel Blaikie, along with leaders of other major unions.

Despite the recent federal guidance issued, the National Union is continuing to explore multiple avenues, up to and including a formal Legal challenge, in the hopes of finding a resolve for our members. The goal is to ensure eligible Unifor members receive SUB payments, and to do so without fear of repayment penalty. This work is coordinated through the National President’s office alongside Unifor’s Auto Director and representatives in the Unifor Legal, Pensions and Benefits and Research Departments.

What can members do to help?

As the National Union continues its work, we will continue to coordinate directly with Local Union leadership and provide membership updates as new information becomes available.

In the meantime, it is imperative that members participate in the ‘Don’t Deny SUB Plans’ campaign by filling out the online petition. You can do this by visiting www.unifor.org/subplans and be sure to encourage others to sign on too.

You can also contact your local Member of Parliament directly, and ask for their support. Many of our members have done this already, and the response from MPs of all political stripes is encouraging. As federal MPs continue to hear directly from their constituents, the more support we will build.

Together we will get this fixed.

We continue discussions with the government to allow SUB payments to (eligible members) who are collecting CERB.  Although the issue has still not been corrected we have made progress towards a resolve.

I have attached three letters, the first is sent to Carla Qualtrough – Employment and Social Development Canada and William Morneau Department of Finance.  The letter is signed by  Daniel Blaikie – Member of Parliament Elmwood–Transcona as well as Jerry Dias, Mark Hancock CUPE and Ken Neumann from the Steel Workers union. The letter is asking the government (1) to deem the CERB an Employment Insurance benefit in such a way as to satisfy the conditions of SUB plans, and (2) to confirm that SUB plan payments will not be considered earnings that would disqualify workers from receiving benefits that they would otherwise be entitled to. Read the Letter.

The second letter is to Shane Wark, Assistant to the President of Unifor from Mathew Hough, Labour Relations at GM to assure our members of their commitment to resolve the issue.  Letter from GM Canada re CERB SUB May 8 2020.

The third letter was previously posted on the website but we have added it to this post for your convenience. Letter to Minister Qualtrough 15 Apr 2020

We appreciate our members patience as we work towards a satisfactory resolve on this issue and once again remind you that both the company and the Union is not the roadblock, we are waiting for the government to apply a fair ruling, so we can get you paid what is due.